Spending 25 years in ministry and education in rural areas, I have an immense amount of passion for women and girls who grow up in these areas. Growing up in an urban area gives me an even wider perspective on education and opportunities within the rural setting. I didn’t realize how incredibly fortunate I had been to grow up in an urban area until I saw the difference in opportunities for rural students.

What I’ve noticed in our midwestern rural settings are that there is a much heavier emphasis placed on sports than arts, and that the number of extra-curricular groups are diminished in comparison to the urban setting. Diversity is rare, and so there tends to be a narrower perspective as far as the acceptance of alternate views (traditions, religions, etc.). Furthermore, not every student’s particular needs can be met within a social context, and services for special needs are sometimes more difficult to receive.

Of all the places I’ve serve, I see that Grand County fills a lot of gaps for its students to provide access to the arts and a diversity of extra-curricular activities like Brain Bowl and Model UN. Beyond education though, our rural area presents issues in transportation and housing, as well as access to services such as health, mental health, and even things we struggle with daily like cell service and Internet access.

The global rural issues are similar to ours, but magnified by about 1000%. Access to all of the issues listed above is more limited, and it is all compounded by a strong sense of tradition and culture. These traditions and cultures in the rural areas seem dominated by historically patriarchal leadership and a very strong sense of machismo.

What I hear repeatedly in the many panels I have attended is that harmful practices like Child Marriage, Early Pregnancies, Violence against Women, and Female Genital Mutilation are intensified in rural areas, and indigenous women suffer the most of all rural people.

There are many reasons for this. Cultural gender norms and tradition weigh heavily in rural areas, even when the national law has prohibited marriage until 18, and when FGM is declared illegal. Think of it as Colorado’s State’s rights – Colorado has legalized recreational use of marijuana, but it is still illegal federally. Except globally, traditions and religious practices of a culture are nearly impossible to “legislate out.” 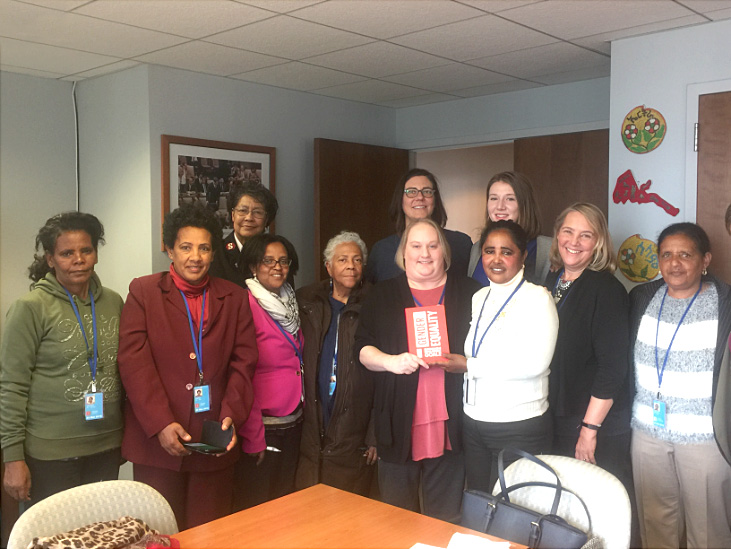 Today I visited the Consulate of Eritrea with a mostly Presbyterian delegation representing Ecumenical Women. This is a young country, located in the Horn of Africa, liberated and independently governed only for the past 26 years and signers of the CEDAW since 1996 (Convention to End All Discrimination Against Women). They are fighting hard within their own country to promote equality for women, and have established gender quotas for leadership within the country. FGM and child marriage has been outlawed there, and both are punishable by law, but they are still very prevalent in the rural areas because women and children do not know their rights.

I was so appreciative of the Eritrean Ministry to receive us so wholeheartedly, and to listen with such interest at our platforms. We listened as well, applauding this young country’s efforts to create gender equality. We were welcomed by their entire CSW delegation – five women and one man.