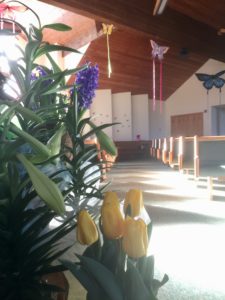 The sun burst over the Divide and pierced through the East windows, shining on the butterflies and warming the flowers up to waft the heavenly fragrance of hyacinth through the Sanctuary this morning.

Easter Monday, 2018. Very early this morning I noticed that the sky was clear and we were in for a beautiful sunrise. Since I was already up and about, I headed into CEH because I wanted to watch what I had hoped for yesterday.

The east windows of the sanctuary did not disappoint. The rising sun pierced through the Valley and burst into our sanctuary. What was even more beautiful was the way it illuminated our chancel area (see picture  on bottom right).

It’s quite unlike yesterday. Yesterday, on a grey April 1, Easter came in with more of a diffused glow. The Divide was thick in clouds and the snowfall limited visibility. The entire Valley had a thick covering of fog and really, the view out the East window looked more like a black and white Currier & Ives print than it did a sunrise. There was light, but we couldn’t see the source.

I remembered the words of C.S. Lewis, “I believe in Christianity as I believe that the sun has risen: not only because I see it, but because by it I see everything else.”  And so, even without seeing the sun, we saw the light — and we gathered tentatively, expectantly, and lifted our voices in song and praise.

Our scripture reading was the Resurrection account from the gospel of John. In this version of the story the women head to the tomb and it’s empty, only the burial cloth is left in the tomb. Jesus was in the garden, but Mary didn’t recognize him (she thought him to be the gardener). But then Jesus said, “Mary” and she knew her teacher.

Rob Bell pointed out that “It is such a letdown to rise from the dead and have your friends not recognize you.”

So at sunrise service I challenged the worshipers to be willing to look at those who have “risen from the dead” and to look at them with “Resurrection Eyes” that expect and believe in transformation; not eyes that expect the same old same old. Because I think all too often we doubt the amazing transforming power of Jesus’ love and forgiveness. I’ve seen it time and time again in my pastoral care: someone bounces back (rises from the dead) from debilitating depression or sobers up (leaves the tomb) from addiction and even their family and friends do not recognize them or the change in their life and will not accept them as a new person.

There are people I know who have been trapped in sin or doubt for years and have been set free by the forgiving and redeeming love of God through Jesus Christ, only to have their family and friends expect failure from them.

Sometimes, even after a holy transformation, we live into what others expect from us. That can be a good thing if people are expecting radical change and helping you to embrace your resurrection; but more often than not it is the expectation of failure and backsliding that people live into. As Bell says, “It’s such a letdown.” 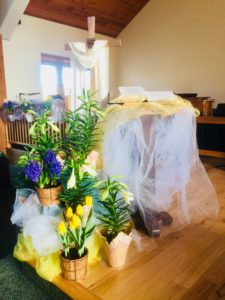 Yes — those lilies are beginning to open their tight buds to trumpet the news of the resurrection to the world.

This morning, in the silence of the sanctuary at sunrise, I noted that our lilies (that had been shut tight yesterday) had begun to open in the sunlight; a poignant reminder that it’s never too late to open our eyes to transformation and change. Let’s expect transformation rather than failure — in ourselves and in those we encounter who have “Risen” from the dead.

Eastertide lasts from yesterday, Resurrection Sunday, through Pentecost. 50 days. In direct contrast to giving up something for the 40 days of Lent, I encourage you to take on something new for the 50 days of Eastertide. What I want you to take on is the expectation of transformation. Watch all around you for marks of God’s transforming power over nature — the budding of the aspen, the early mountain flowers, perennials beginning to sprout after a long winter, snow melting into raging rivers that flow furiously and can transform the landscape by finding new paths down mountainsides.

Because what we see and witness in creation is reflective of our Resurrecting God. We expect creation to break forth in new life; can we begin to expect new life through the transforming power of the resurrection?

I pray we can, and we will, as we live into the promises witnessed so gloriously all around us.