Ineffable. That’s the best word I know to try and put words to the presence or identity or relationship of God to God’s people. “Ineffable” means that words just won’t do, that what one is trying to describe is beyond words.  Ineffable seems like a strange way to define God, but all our attempts to describe Her fall utterly short of the holy mystery.  Even the name “God” is just more of a description. I like the description “Divine Other” instead: He/She is something so much bigger and “other” than us, so holy and divine, we can’t even capture it in words.

In our scripture reading, we heard Nicodemus asking in wonder how one could be “born again?” Jesus had stumped him, and didn’t offer much help as Jesus basically said, “You can’t understand the things of this world; how can you understand the Holy?”

The concept of the Holy Trinity is also just another attempt to describe God. It’s a completely  human construction that has caused divisions and arguments within the church for as long as we have attempted to find words to express our common belief in God as Christians. But every first Sunday after Pentecost, we celebrate “Holy Trinity Sunday.” It is the only Sunday of the Liturgical year that focuses on doctrine.  Because remember — the Trinity is doctrine; it isn’t a scriptural truth — it is derived from scripture. It is human’s best attempt to describe something ineffable, remember?

In my recent trip to Greece I took immense joy in studying the icons at the monasteries and Basilicas found in every city and village and upon every island we visited. On the beautiful island of Hydra, I found a little Trinity icon (see below) tucked away in a dark corner. I looked closely and noticed that it was entitled “The Hospitality of Abraham.”  Many times I’ve seen the Trinity pictured at Abraham’s table; but this was the only one I had noticed that had Abraham and Sarah in the picture. 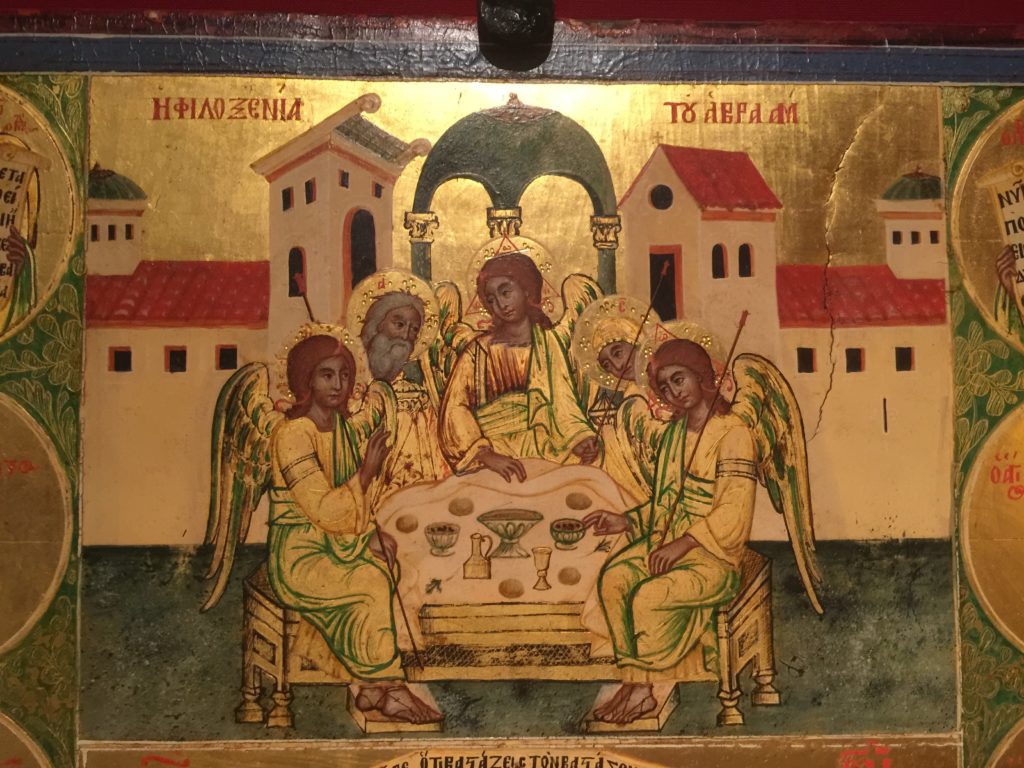 “The Hospitality of Abraham” Icon, Ecclesiastical Museum of the Monastery of the Assumption of the Virgin Mary, Hydra Island, Greece

Take a close look at this icon. Do you notice that the three strangers who sought hospitality from Abraham are seated at the table, in the shape of a triangle. They are all looking to each other.  But Abe and Sarah are on the outside of that triangle, just peeking in! It’s as if they are trying to get a glimpse of this holy gathering.

As interesting as this icon is to me, I don’t expect it clears things up for you at all about the Holy Trinity (and just for your reference, every time I say “Holy Trinity” I sing it at the top of my lungs in an operatic voice; either that or I whisper it). So since we’ve agreed that God is ineffable, and that the Holy Trinity is confusing, let me put it to you this way: the Trinity is the way that humankind has tried to “sum up” all the ways that God has revealed Godself to us — the ways that we come to know and experience the “Divine Other.”

Creator/Father/YHWH — we learn about God the Creator as we interact with creation and come to understand some of the Holy Mystery through the patterns and re-creating life we see in nature. We recognize how richly God has provided for us through the cycles of the seasons. We witness inconceivable beauty from the tops of the mountains and even in the most barren places of the Great Plains. God revealed Godself as YHWH in the Hebrew Scriptures, when humankind received the law and the Torah, and learned how to be in Covenant with the Divine Other. This YHWH was powerful and awe-inspiring and the glory shekinah; distant, dangerous, and so Holy one could not even look upon God.

Redeemer/Incarnation/Jesus — we learn about the Divine Other very personally through “The Word made flesh.” Emmanuel “God with us”! Jesus was a real human, flesh and bone that we could see and listen to and touch and walk alongside and reach out to grasp the garment of. Jesus was the one whose very being was Divine and his life and teachings modeled to us the way we are to love each other. Jesus taught us that yes YHWH gave us the word, but when we live the word out it looks like a humble, loving healer, who had no earthly possessions and spent his time building relationships and reaching out to bring the outcasts back into community. And when his death was imminent he gave his students a shocking charge: I’ve redeemed you; now go and do likewise for others.”

Sustainer/Holy Spirit/Advocate— we learn about God the Holy Spirit through every movement and interaction and feeling we experience. God the Spirit is our direct link to the Divine Other, communicating for us even when we don’t have words to express our pain. Spirit is the very breath Creator breathed into us and we are reminded of it each time we take a long, deep breath and fill our lungs with the life-giving mixture of air that Creator provides. Spirit is the goosebumps and warm and cozy feelings we receive as well as the incredible sense that we are not alone. It is the Love that binds us together in unity when we are singing hymns or speaking liturgy, gathered together in prayer, sitting in silence together. God the Holy Spirit surrounds us and changes the everyday ordinary into the sacred.

The three persons of the Trinity — Creator, Redeemer, Sustainer — are how we know and relate to God. As Christians we think Jesus is the part of the trinity we understand the best, but it is the part where we fall the shortest. We are called to be the presence of God to others by modeling the love of Emmanuel. But there’s a lot of hurting and broken people out there who are just waiting for Jesus to look them in the eyes and ask, “Are you okay?” Guess what? That’s YOU who needs to be looking people in the eyes so that you can see Jesus in them and you can be Jesus to them.

Sunday was not only Holy Trinity, it was also the day before Memorial Day. In honor of this, Elder Bob Gaskins felt compelled to write about how he came to know and understand God through three special men in his life. They were, to Bob, the presence of Jesus. They lived out the charge to “Go and do likewise.” I share his words with you to remind you that it is up to us to be the resurrected Body of Christ and the very presence of the Holy in this world. Though God is ineffable, these words do a pretty good job of defining what it means to “Go and do likewise.”  Thank you so much for sharing these reflections with us, Bob:

The Spirit moved me to share the following testimony yesterday with Paula regarding three fathers who served their country during wartime and also had a significant impact on my life. She asked me to share this testimony with you today.

As Memorial Day approaches this coming Monday, I am so thankful for the roles which three fathers played in my evolution as a born-again Christian. For all three of these men, their Christian faith played a key role in their lives and their ability to serve their country in combat when it counted most.

The first is my father, Warden Gaskins, who was raised Methodist in North Carolina and enlisted in the submarine service the day after Pearl Harbor. He served as an officer on attack submarines in the western and northern Pacific for the entire duration of WWII, earning the bronze star for actions taken during combat patrols. Dad’s Christian faith was a bedrock in his entire life, sustaining him through the death of his father at age 12 and through the seemingly endless years of WWII. He was very involved in our local Methodist church while I was growing up, which provided the initial foundation for my own early Christian faith. This same faith sustained and nourished Dad as he cared for my mother who had Parkinson’s disease for many years later in life, and then after her passing, as he lived out the remainder of his life without her.

The second is my ex-father in law, Bill Mason, whom I grew extremely close to during my marriage to my son Billy’s mom. Bill served as a soldier in the 10th Mountain Division during WWII in Europe. He fought in the battles for Riva Ridge and Mount Belvedere in early 1945 that proved pivotal to the Allied troops’ ability to defeat of Nazi Germany later that same year. Bill was one of the most modest and caring individuals whom I have every known, and his solid and unwavering Christian faith was his foundation for a life of amazing accomplishment and contribution to others. When I asked him what was most important in his ability to keep his head calm through the savagery of hand-to-hand combat in war, and through other extremely challenging life experiences, Bill’s answer was his absolute faith in Jesus Christ as his Lord and Savior. I was so very honored and humbled to be asked to deliver one of the eulogies at Bill’s memorial service six years ago when he left us to be with Jesus.

The third is my deceased wife Joanie’s father, Paul Riley, who I never met, as he was killed in combat in Vietnam in 1967 when Joanie was 11 years old. Paul Riley grew up in extreme poverty in Texas and enlisted in the army upon graduation from high school in 1947. He served multiple combat tours in Korea and Vietnam as an infantry sergeant, and was highly decorated for battlefield bravery in both wars, earning several bronze stars, purple hearts and other commendations. Additionally, three months prior to his death during his second Vietnam deployment, he was awarded the silver star which is our country’s third highest medal for combat gallantry, for his actions in which he single-handedly destroyed enemy combatants and pulled his comrades to safety in the midst of heavy enemy fire, while totally ignoring his own safety. Paul had a very small, well-worn Bible that he always carried in his rucksack during combat missions. He was a Christian man who believed that he was serving God as a soldier by protecting his country and his family from evil. He lived by the words of Jesus inscribed in John 15:13 which are: “Greater love has no one than this, that he lay down his life for his friends.” At a reunion of his surviving comrades from Vietnam that we attended six years ago, they each recounted countless times when he put the words of his faith into action by saving lives on the battlefield. He was a quiet man with immense strength of character, and he was their rock and their calm in the constant storm of jungle warfare. They could clearly see and feel God’s love for them through Paul’s actions. After that reunion, I gave Joanie a pendant inscribed with the words “John 15:13” as a daily memory of her father’s everyday commitment to Christ’s words. After Paul’s death in 1967, the only thing which returned from the battlefield to his family besides his identification dog-tags was his little Bible which had somehow survived the massive land mine explosion targeted for him by the Vietcong.

I believe that all three of these men are saints in their own way and are now living in resurrected glory with Jesus. They each demonstrated Christ’s Word through their actions. In other words, they “walked the talk”. And, I am eternally thankful that each was placed in my life by God to provide guidance for my own journey to my born-again Faith in Jesus Christ as my Lord and Savior.